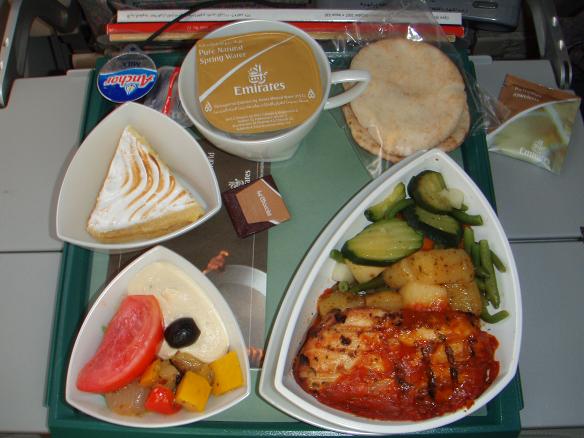 Our Round The World Trip home page is here.
Part Fourteen is here.

We woke up and ate a leisurely breakfast, packed and let the Hyatt’s complimentary Mercedes chauffeur us to the airport.  We boarded our Emirates flight for Cairo.  Snookums watched movies for 3 hours and 50 minutes while Filbert looked outside.

We landed in Cairo and saw the dirt and oldness of the airport right away and realized we weren’t in a first world country anymore.  We bought our $15 visas without any hassle (and with no line), went through immigration but couldn’t figure out why the second and third passport officials had to handle our passports (other than the need for jobs), found an ATM to get Egyptian pounds and then started to hunt for the taxi line.  Unfortunately, there isn’t one at the Cairo airport!  Instead the taxi drivers approach you and follow you around and start yelling for your business.  We were skeptical of the first one that approached us and found an airport official and he took us to another cab driver.  We agreed upon a price with the driver and walked about two blocks and down a bunch of stairs to the “taxi” lot.  The driver knew we were skeptical so he made a point of telling us that when we left the airport the police would take down his name and our names so that nothing strange could happen.  And, the police did.  We got to the Hyatt without incident and the bomb sniffing dogs let the taxi through the gate.

We were upgraded to a Regency Club room with a pyramid view which would have cost $255 per night plus tax.  Our room was on the Nile (all the Hyatt rooms are) but since it was dark we couldn’t see the pyramids that were about 4 miles away.  We ate in the Regency Club and asked for a couple bottles of water to take back to the room since we were told not to drink the tap water and were shocked to be told that no food or beverage could be taken out of the Regency Club.  We asked about water to brush our teeth with and were told to buy the water from the mini bar in our room.  Well, we were not going to spend $3 for a bottle of water so we took a walk to find a market.

One difference we noticed right away as compared to India was that there were fewer cars in Cairo, although there were still a lot, which meant that the cars could go much faster (and still could fit two cars in one lane).  We realized this when we had to cross the street that was at the base of the Hyatt’s long driveway.  There was a crosswalk in the pavement and there were two police officers, but we were totally on our own.  We never could figure out what the police officers were doing at that crosswalk, but they never helped us on any of our walks.  We decided to just kind of jump in front of the traffic and since no one wanted to fill out any paperwork on a dead tourist, no car hit us and we crossed the street successfully.  We wandered around until we found the main street close to the hotel and walked by several one-room “grocery” stores.  We gave up on finding a clean grocery and finally went in one and bought a six pack of water and walked back to the Hyatt.

Filbert deemed today a “sea day” and Snookums wholeheartedly agreed since she was still fighting her cold.  We walked around the inside of the hotel and went to the shops in the connecting mall.  We bought a bottle of cough/cold syrup for Snookums for $0.30 at the pharmacy in the mall.  You have to love the prices of drugs in third world countries.

After our hour of exploring the hotel and shops, we returned to the room.  Filbert used the wired internet and Snookums watched movies and news.  We did not leave the Hyatt building.  We also could not see the pyramids due to the pollution.  The Nile looked clean or at least we didn’t see any trash floating on it.  But, we could definitely see all of the air pollution from our 35th floor room.

This morning we met our guide, Karen Phillips (www.heartofegypt.com).  She is a British ex-pat and has lived in Cairo for five years.  Prior to that she lived in the U.S. for 15.  She loves Egypt and it shows.  Karen told us that baksheesh is a way of life in Egypt.  Baksheesh is tipping (or, bribing, depending on who you’re slipping the cash to) and Karen was constantly giving little amounts of money to guards, the man at the mosque that put slippers on over our shoes, the woman at another mosque that stored our shoes, etc. She explained that since salaries are so low these tips really are the difference between having enough and not.

We started out by seeing some mosques including one that had a staircase on the outside of the minaret.  We climbed it and since we were outside and the mosque was on a hill we had a good view of Cairo and could see lots of rooftops.  Karen pointed out the sheep that were being stored on the tops of some of the buildings.  She also showed us the pigeon cages that were on rooftops.

At the next mosque (Sultan Hassan Mosque) Karen knew the muezzin very well.  The muezzin is the man that sings the calls to prayer five times a day and at this mosque the imam had retired which meant that the muezzin was also the imam.  Karen told us that this muezzin makes around 170 Egyptian pounds per month (or $30.  Our 6 pack of bottled water was 10 Egyptian pounds or $1.80.)  He did a “demo” for us and then asked us to join him for tea.  We said yes and since Snookums and Karen had colds, he gave them anise tea and Filbert had regular tea.  The anise tea tasted just like licorice and Snookums actually found it very palatable.

We sat and talked for a little while (with Karen translating the Arabic) and then after a hospitable amount of time, excused ourselves to see the neighboring mosque.   (Yes, Karen slipped him some baksheesh and told us that he never wants to take it but that she says it is for his three children and then he can’t refuse.)  This next mosque (Al-Rifa’I Mosque) is the final resting place for the Shah of Iran and since it was the anniversary of his death there were a bunch of flowers on his grave and an Iranian official was sitting in the room.

After touring three mosques (and taking our shoes off for the last two) we were ready for lunch so Karen’s driver took us to a nice restaurant on the banks of the Nile.  We had three kinds of hummus, a plate of “pickles” (most were hot and spicy), a lettuce salad and Snookums had a shawarma sandwich and Filbert had a mixed grill kebab plate (and two beers since he saw that Karen was having one!).  It was a relaxing lunch and we learned about Karen and her odyssey that landed her in Egypt.  (She had just gone through a divorce and decided to travel for two months and went to Egypt and fell in love with it and over time moved there permanently!)

After lunch our fun really began.  Karen took us to a street (alley) that is home to a normal market for Egyptians.  There were no tourists at this market.  Vendors lined both sides of the streets and this included wide-open storefronts as well as just a people manning carts.  And cars and scooters would also drive down the street so you had to be careful. A lot of vendors knew Karen and they all wanted to talk to her and they waved.  I don’t think there are many Arabic-speaking Caucasian women that walk down this street so she stands out when she brings tourists.  We saw chickens in their cages (when you buy them the seller plucks them for you) and goats for sale (or maybe just their milk?).  We also saw two young women selling garlic (and just garlic).  We also saw a pharmacy and we went in with Karen since Snookums thought she was getting an ear infection.  The pharmacist didn’t have what Karen thought was the right stuff so we continued on.  There were vegetables for sale and packets of Knorr soup mix and really just about everything that you would find in a US supermarket, although it was mostly bulk and not as well packaged (or as clean) as we have here.

Karen wanted to talk to the friendly garlic vendors that she knew and then they reminded her that they’ve always wanted their picture taken with her so Filbert obliged and took pictures and then emailed them to Karen.  They appeared to be in their late teens or early twenties and they must not have been married since when they found out that we didn’t have children they commented and pantomimed that children are a hassle and they don’t want children either!

We continued our stroll through the market and Karen said hello to some man and chatted for a few minutes.  He told her about his 2 year old son by his second wife (he’s still married to his first wife!) but his second wife is mad at him so he hasn’t seen his son in a few weeks.  I guess polygamy is allowed in Egypt since he wasn’t trying to hide anything.

We walked a few more feet and Karen told us we had to meet this woman.  She appeared to be a soap vendor and she had a broken down cart that contained boxes and bags and bars of soap.  She was missing some teeth and we think her name is Mertha.  Anyway, she invited us to tea and since Egyptians are very hospitable and this is part of the culture, we said “yes”.  She scurried around and found three ratty chairs for us and a broken crate for herself.  Snookums ordered tea without sugar and Filbert and Karen ordered coffee.  The tea vendor delivered the tea on a battered silver tray.  Snookums’ glass was chipped and she soon found out that it contained hot tea with sugar which really tasted like sugar syrup.  It was so sweet, but she managed to choke most of it down to be polite.  While we were having tea other Egyptians would come up and stare.  We thought they wanted to buy soap, but after they would leave Mertha would tell us (via Karen since she spoke Arabic) that they just wanted to be nosey.  It was so funny to see Mertha shake her head and basically yell at these busybodies to be on their way.  Karen had told us as we were walking up to meet Mertha that Mertha is the “boss woman” of the market and this did look to be the case.  She also smoked and it’s very unusual for Egyptian women to smoke in public, but she didn’t care.  We got the distinct impression that people either put up with her or hated her and that there really wasn’t much of a middle ground!  After about a half an hour, we kept walking through the market.  (The tea vendor came by after 15 minutes to collect the glasses.)

The trip continues in Part Sixteen, here.
Part Fourteen is here.
Our Round The World Trip home page is here.