With the apparent passage of the Iraqi constitution, the quagmire in which anti-liberty forces such as Teddy Kennedy, George Soros, and Cindy Sheehan find themselves grows deeper. They have no exit strategy for their myopic and cynical opposition towards the ultimate WMD (weapon of mass democracy): individual freedom and liberty.

We can only continue to call on Kennedy, Soros, Move-On, the New York Times, the Democratic Party, and all other No-Blood-For-Freedom forces to pull out of their doomed foray into politics and to bring the rent-a-mobs home.

Isolated incidents, or a new terror strategy of targeting institutions of higher education?

Seems that long-time political blogger Bill Hobbes is tiring[*1] of the all-politics-all-the-time world:

The biggest change: I’m going to suspend writing about politics for awhile. After four years of writing about Tennessee state government and the state budget – more, actually, if you count the more than a year that I wrote about that topic for the City Paper and, before that, for about a year for the now-defunct weekly In Review – I need a break from it.

I’ll be publishing non-political essays here from time to time – because I’m a writer not just by trade and training but by nature. I might also do some more photo-blogging. And, occasionally, if I have some new insight into this fast-evolving new world of citizen journalism that hasn’t already been noted by Jeff Jarvis or J.D. Lasica or Jay Rosen I might peck out an essay on that.

But what you won’t see me doing is day-to-day coverage of and commentary on what’s in the news that day in state or national politics and government. Instead, I’ll post, without commentary, links to articles and blog posts that I’ve read and think you might like or benefit from reading too.

It didn’t take me near as long as him to burn out on the daily grind. But I’m enjoying life more now by not thinking I have to post ten different things every day, I know that.

Let me get this straight: the complaints against the nomination of Harriet Miers to the Supreme Court consist of:

1) She’s not a judge (i.e. “doesn’t have the background.”) Or, variously, she’s not a “constitutional scholar” like those Justices who have given us such learned decisions as Kelo v. New London.

3) She’s someone who didn’t show up in the crystal balls of our esteemed pundits and experts. They’ve been shown up by Bush and are embarrassed and angry about that.

4) Harry Reid likes her, therefore she must be a stealth liberal moonbat.

6) She’s not stunningly physically attractive. This one puzzles even me. I mean, Ruth Bader Ginsberg somehow got on the Court, didn’t she?

Did I miss anything? 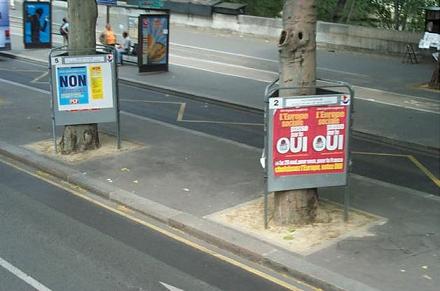 This is just a bit tardy, but . . . Snookums and I took our honeymoon (our FIRST honeymoon, anyway) in Paris. Yes, the one in France. Here are a few pictures: