Posting will be light-to-nonexistent for the next month or so. Gone fishin’.

If you respect and admire the Iranian President, Mark Steyn[*1] points out a perfectly reasonable and legitimate way to emulate your idol:

You know what’s great fun to do if you’re on, say, a flight from Chicago to New York and you’re getting a little bored? Why not play being President Ahmadinejad? Stand up and yell in a loud voice, “I’ve got a bomb!” Next thing you know the air marshal will be telling people, “It’s OK, folks. Nothing to worry about. He hasn’t got a bomb.” And then the second marshal would say, “And even if he did have a bomb it’s highly unlikely he’d ever use it.” And then you threaten to kill the two Jews in row 12 and the stewardess says, “Relax, everyone. That’s just a harmlessr hetorical flourish.” And then a group of passengers in rows 4 to 7 point out, “Yes, but it’s entirely reasonable of him to have a bomb given the threatening behavior of the marshals and the cabin crew.”

If it makes sense on an airplane, it must make sense in the United Nations, right? 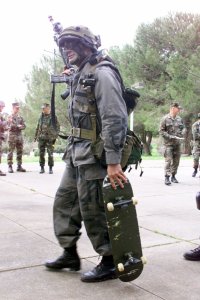 Defensetech.org[*1] is on the story, passing along this caption from the DOD’s Defense Visual Information Center[*2] :

LCPL Chad Codwell, from Baltimore, Maryland, with Charlie Company 1st Battalion 5th Marines, carries an experimental urban combat skateboard which is being used for maneuvering inside buildings in order to detect tripwires and sniper fire. This mission is in direct support of Urban Warrior ’99.

And if this doesn’t work by itself, a combined-arms assault using both skateboards and Avril Lavigne would be unstoppable.

In retrospect it is clear that the weapons did not exist, although they had in the past, and Hussein had used them against his enemies. But what is also clear from captured documents now coming to light is that Mr. Bush had every reason to believe they still existed at the time he launched the military campaign in Iraq. Not only did US and allied intelligence agencies assert that the weapons were there, but Hussein himself played a dangerous game of convincing enemies such as Iran, and even his own generals, that he had such weapons, while protesting to United Nations inspectors that he did not.

While Bush may have been badly misled by his own intelligence and other sources, he did not lie. He believed, and had good reason to believe, that the weapons existed.

If you continue to believe “Bush Lied” then you, my friend, are either being misled in exactly the same way Bush was, with “inaccurate intelligence from trusted sources” or you are yourself a willful liar. There is no other option–dupe? or liar? What are you?

As described in Hughes’ article, captured Iraqi documents show that even Saddam’s military believed until December, 2002 that Iraq had a flourishing WMD program. Hussein was brought down in early April of 2003.

But within Hussein’s war council, the story was verydifferent. In December 2002, Hussein called his generals together for asurprising announcement: Iraq did not possess WMD. The generals werestunned. They had long assumed that they could count on a hidden cacheof chemical or biological weapons. Iraq had used such weapons in thewar with Iran. Hussein had convinced his generals that it was thethreat of WMD that had enabled him to stop the Americans moving onBaghdad after the 1991 war.

If someone points a gun at you and tells you it’s loaded, it’s usually a good idea to believe them.

how can a barely discernible, one-degree increase in the recorded global mean temperature since the late 19th century possibly gain public acceptance as the source of recent weather catastrophes? And how can it translate into unlikely claims about future catastrophes?

The answer has much to do with misunderstanding the science of climate, plus a willingness to debase climate science into a triangle of alarmism. Ambiguous scientific statements about climate are hyped by those with a vested interest in alarm, thus raising the political stakes for policy makers who provide funds for more science research to feed more alarm to increase the political stakes. After all, who puts money into science–whether for AIDS, or space, or climate–where there is nothing really alarming? Indeed, the success of climate alarmism can be counted in the increased federal spending on climate research from a few hundred million dollars pre-1990 to $1.7 billion today. It can also be seen in heightened spending on solar, wind, hydrogen, ethanol and clean coal technologies, as well as on other energy-investment decisions.

When somebody tells you that no serious scientist in the field has doubts about Mankind’s negative impact on global warning, they are, to be blunt, lying.

Unless you don’t consider a full professor at an endowed chair at the Massachusetts Institute of Technology with a list of publications as long as your arm[*3] to be a serious scientist in the field.

Informed debate is what science is all about.  Too bad one side of this argument wants to shut the other side down.  Take a guess as to which side is which.

Four years into the “war on terror,” the Bush administration has begun promoting a new formulation: “the long war.” Not a reassuring name. In a short war, put your money on tanks and bombs–our strengths. In a long war, the better bet is will and manpower–their strengths, and our great weakness. Even a loser can win when he’s up against a defeatist. A big chunk of Western civilization, consciously or otherwise, has given the impression that it’s dying to surrender to somebody, anybody. Reasonably enough, Islam figures: Hey, why not us? If you add to the advantages of will and manpower a nuclear capability, the odds shift dramatically.

Meanwhile, a large portion of the credit for the current world situation can be given to the esteemed former President James E. Carter[*2] .

Are you really willing to bet the entirety of western liberal civilization on the premise that the Islamic extremists don’t mean exactly what they say?  Jimmy was, and we are now reaping the whirlwind of his misjudgment.  Frankly, I think the Bush Administration is also badly mismanaging the world situation, not by being too aggressive, but by being too timid a la the Carter Administration.  Much of that timidity is due to the rabid resistance of the left.  It’s not so much that I’m for Bush, it’s just that the alternatives are much, much, much worse.  If there was a Democrat who understood that it’s 1936 all over again, I wouldn’t be nearly as concerned as I am.

A fascinating take from Austin Bay at StrategyPage[*1] , which may explain the glacially slow progress in forming an Iraqi govnerment.  Bay thinks that it’s because Grand Ayatollah Sistani is making a quiet power play to push radical Muqtada Sadr to the sidelines:

Late one afternoon in mid-August, I delivered a brief report to British Maj. Gen. Andrew Graham in his Al Faw Palace office (west of Baghdad). Graham, as deputy commander of Multi-National Corps-Iraq, had been deeply involved in directing the coalition’s military response to Sadr’s audacious move.

After discussing my report, Graham asked, “Remember what I said about Ayatollah Sistani?”

Graham was referring Iraq’s leading Shia cleric, Grand Ayatollah Al-Sayid Ali al-Husseini al-Sistani. A week earlier, Graham had told me: “Sistani is a living example of an apolitical Islamic clergyman. He specifically says his role is that of spiritual guide.”

I told Graham I recalled our conversation.

“He’s central to resolving the situation Najaf,” Graham said. He added that winning the global war against Islamist extremism meant that moderate Muslim clerics had to speak out, but — and here’s the quote I remember — “The pro-democracy moderate Muslim cleric doesn’t have to be found. That’s Sistani. Fortunately, he is the most influential religious leader in Iraq.”

Within two weeks, Sistani helped engineer a withdrawal of Sadr’s militia from the mosque. Tactically (and with little media fanfare), coalition military units had mauled Sadr’s militia. Superficially, Sadr had “lived to fight another day.” But the mosque wasn’t rubble. Damage to the mosque was blamed on Sadr’s militiamen. (Iraqi police also found pornographic magazines left by Sadr’s men inside the mosque.) The people of Najaf greeted coalition troops as liberators.

Sistani’s aides told Iraqi and coalition officers: “Let us deal with Sadr. We know how to handle him and will do so. However, the coalition must not make him a martyr.”

I left Iraq with the impression that Sistani’s plan for handling Sadr would be a python-like squeeze only an Iraqi insider would fully understand.

Following the January 2005 election, Sadr joined Iraq’s political process (though I noticed his militia kept its weapons). After parliamentary elections, Sadr gained control of nearly three-dozen seats and positioned himself as a kingmaker.

But that status appears to be short-lived. One indicator is the March 26 attack by Iraqi commandos on a Mahdi militia facility in Baghdad. The predictable media outrage lasted less than a week — and Iraq’s Interior Ministry pointed out it had acted to stop sectarian vigilantes. Sadr lost “street face” to the Interior Ministry — and it appears Sadr’s political position has subsequently deteriorated.

Outsiders — including U.S. government officials — can bewail the Iraqi parliament’s lack of progress in forming a government, but since the middle of March I strongly suspect the hidden story has been the Interior Ministry and the Iraqi nationalists’ war on Sadr. It’s a quiet police and political war waged with the blessing of Ayatollah Sistani. Creating a strong and stable Iraqi government (the so-called “national rescue front”) is the goal. Sistani has advised Shia leaders to make concessions to Sunnis in order to establish a “unity government.” That’s an action anathema to Sadr.

This just in from the extra-legal Special Prosecutor Patrick Fitzgerald:  “Never Mind!”[*1]

Even if you’re the most determined Bush-Hater, you have to see that this puts things in a completely different light.  Instead of focusing on one specific fact to “leak” to reporters, we now see that Libby’s instructions were to convey “some of the key judgments” of the National Intelligence Estimate, one of which is to debunk discredited Ambassador Joe Wilson’s rogue report on Niger.

(Actually no, you don’t have to see it that way.  I’m pretty sure you won’t.  You’re so wrapped around the axle that you think the Sun rising in the east is somehow Bush’s Fault.  Get a grip.  Go play with your dog or something for a while.)

Meanwhile, if Fitzgerald is this sloppy in this court filing, what else has he misconstrued or mis-stated in his zeal to get someone, anyone to justify his existence?