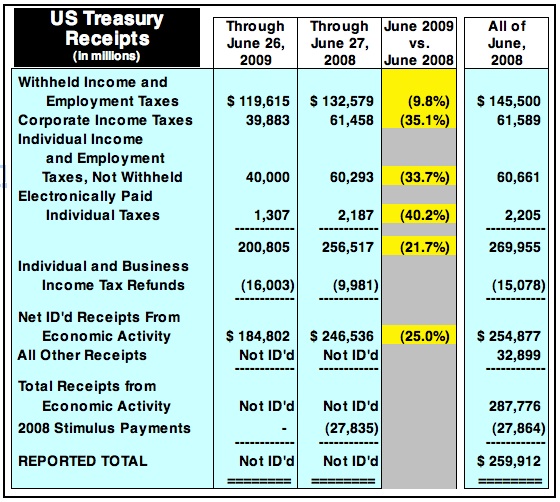 The parenthesis mean negative numbers, folks. This economy is flat-lining. It’s a building that’s burning, and all the Democrats seem to want to do is pour gasoline on the fire.

Personally, Al Franken couldn’t happen to a nicer party than the Democrats.

After all, they all seem to think they’re smarter and funnier than they actually are.

No, wait . . . Democrats are funny, in a watching-a-plane-crash-and-knowing-that-innocent-people-are-going-to-die sort of ha-ha way.

This is the dawning of the Stuart Smalley Age. Doggonit, people like us!

And in a post about the report on his blog, the CBO’s director, Douglas Elmendorf, writes[*2] that “under current law, the federal budget is on an unsustainable path.”

That would be the OBAMA budget, for those of you still bitterly clinging to your Bush Derangement Syndrome. The Obama budget BEFORE the Democrats pass their imminent Health Care System Destruction Act of 2009. We’ll be broke, but we’ll have access to health care, yup, yup, yup, but we’ll have to wait twelve months to see someone about that ingrown toenail.

OK, the headline probably is a bit tasteless. But it appears to be true.[*1]

The most frightening thing about Orwell’s life is that it took a man as inquiring and perceptive as he was so long to understand his world. It took years for him to grasp that power was only interested in itself. He had reached the middle of his life before understanding that outwardly commonplace things like the Party were devoted only to their own ends. Once he recognized this he spent the rest of his life warning of the great danger which was upon us. Yet the miracle was that he understood it at all. The “obvious” idea that freedom is a meme that must daily struggle for its existence was not so evident after all. Some — the countless numbers who went to their deaths still praising Stalin or thinking that the “Revolution had been betrayed” — never realized the truth at all. They never realized that they were experiencing the Revolution: the revolution in which Power ruled forever. But to understand that concept would have been to know too much. Only O’Brien and finally Winston Smith understood the truth. For the rest, there is Victory Gin. Hitler once remarked that the bulk of humanity is easily mislead and any leader worthy of the name would take advantage of the fact.

The ability to recognize the face of tyranny is a fragile skill which cannot really be passed on, except as a critical attitude. As the twentieth century recedes into the past, a kind of antiquity has descended over the prophets of the past, who speak to us now only through old, cloth-covered books from second-hand bookshops or lying in corners at garage sales or lending libraries. Even 1984 is set in a time so long ago that it can only be portrayed in film as steampunk. We can no longer imagine “a boot in a human face forever” in a world where the Croc sandal may be the preferred footwear of militants. ‘A Croc sandal stamping on a human face forever?’ Who could credit such a tyranny, even if it were true? But the face of evil ever renews itself. When Moses returned from Mount Sinai he discovered that it had taken a new shape.

I’m surrounded by people, and by an entire culture, who not only think “it can’t happen here” but are actively engaged in the soft and gentle (and sometimes not so soft or gentle), mocking, condescending suppression anyone who thinks “you know, human nature hasn’t fundamentally changed in the past 100 years, let alone the past 10,000.”

So, I’m afraid. I’m afraid that Jefferson was right when he said that liberty was a tree that required the watering of the blood of tyrants and patriots. I don’t want to live through a civil war. I don’t want to live through Kristallnacht, either, but I have the feeling that that’s what is quietly happening, while everybody distractedly obsesses about everything else, from Michael Jackson to global warming. I’m not afraid for myself, but for everybody else who have no clue what’s coming. And I think it is coming.

The looters are in power, and they’re doing what comes naturally to human beings who have power without check or responsibility. They loot.

Exhibit 1: Mark Sanford, Governor, South Carolina. Skips out on his job, his wife, his family for a junket to Argentina to bang his lover.

Exhibit 2: The 219 cretins who laughingly call themselves “United States Representatives” who passed–sight-unseen–a 1,200-page bill to outlaw basically the entire economy of the United States, while most of you were out mourning over Michael frickin’ Jackson. Nice.

They did not read the bill. They couldn’t have. At the time they voted on it, the bill didn’t actually exist[*1] in its final form. Who knows, it might never. But that’s OK, isn’t it? Isn’t it?

These 219 pinheads, having proven beyond a shadow of a doubt that they are a danger to themselves and–especially–others, should be detained by lawful authority, given a fair trial, and institutionalized in a mental institution for the remainder of their intellectually impotent lives.

These people don’t give a rat’s ass about you, your household budget, your job, or basically anything about your life. Because they know better than you how you should spend your money. They know this because you keep foolishly wanting to do things like heat your house in the winter, and cool it in the summer.

They know this because you insist on exhaling that dangerous pollutant–carbon dioxide, instead of just going and dying like a good little prole.

Why would you want to put a dagger in the heart of the national economy, when unemployment figures continue to come in “over economists’ estimates?” Because you’re a Democrat (or one of the eight even more idiotic Republican), of course!

Politicians, in general, are people with little to no contact with reality. It is our obligation as citizens of this country to re-acquaint them.

Vote against an incumbent–regardless of party. Do it while you still can–assuming Obama and ACORN won’t make it too late already in 2010.

Next up, an intricate, hard-to-understand, and utterly un-read bill intended to destroy the American health care system. I’m so PROUD to be an American.

Further Update: Why, yes, I have been reading quite a lot of Ace of Spades HQ[*2] and Protein Wisdom[*3] lately. How did you know?

that Farah Fawcett or Michael Jackson are dead. Sorry. Neither one impacted my life overmuch (although I was indeed an impressionable young boy when Farah was HOT!!!)

People really need to get a grip. Go talk to your FAMILIES for crying out loud, rather than pining over the demise of celebrity actors and entertainers who never, ever even knew you existed.