Free people should never, ever cave in to threats of violence if demands to sacrifice their freedoms are not met.

This time they are pro-Israel thugs as opposed to extremist Muslim thugs (and various other thugs), but thugs are thugs. Here’s what happened; I quote Seattle Mideast Awareness Campaign v. King County (W.D. Wash, decided last Friday): The county Department of Transportation in Seattle sells advertising on buses; the Seattle Mideast Awareness Campaign bought space for an anti-Israel ads: “The proposed ad read ‘Israeli War Crimes: Your Tax Dollars at Work,’ and featured a picture of children next to a bomb-damaged building.” When this hit the news, the Department got lots of objections, including “four [messages that] suggest[ed] an intention to disrupt or vandalize buses, four [that] communicate[d] violent intentions, [and] approximately twenty [that] express[ed] concern for rider safety.”
. . .

The Department then canceled the ad contract, partly based on these messages. And the federal District Court held that the action was likely constitutional, because the ad violated city policy that excluded ads that are “so objectionable under contemporary community standards as to be reasonably foreseeable that it will result in harm to, disruption of, or interference with the transportation system” or that are “directed at a person or group” and are “so insulting, degrading or offensive as to be reasonably foreseeable that [they] will incite or produce imminent lawless action in the form of retaliation, vandalism or other breach of public safety, peace and order.” This policy, the court said, was viewpoint-neutral and reasonable, when applied to this ad, because “The threats of violence and disruption from members of the public … led bus drivers and law-enforcement officials to express safety concerns.”

Now on the one hand I sympathize with the Department’s safety concerns, and its desire to protect passengers. But on the other hand, behavior that gets rewarded — here, the making of threats — gets repeated.

The message is clear: If you want to stop speech that you dislike, just send a few threatening messages and you’ll win. You don’t actually need to act violently, and risk punishment for that. You could send the threats anonymously, in a way that makes it quite unlikely that you’ll be punished.

This is a travesty.

This is, if you think of it, exactly what the union people are doing in Madison to the citizens of Wisconsin–threatening them.

It is an extremely dangerous road to keep going down. We should probably stop. Before the threats begin turning into something much, much worse. I really, really do not want to live through a civil war.

People who threaten violence in order to advance their goals are outlaws, and should be treated as such. They should not be defended by the very laws they threaten to violate.

Not safe for work.

Via Ace of Spades HQ.[*2] Because Honey Badger don’t care.

Especially amusing is the poster (at the link) announcing the sherriff’s sale of the Wells Fargo Home Mortgage office, in order to pay the guy’s judgment award.

Is exactly, precisely the spectacle we have been presented with in Madison, Wisconsin the past week or so.

A special interest pressure group that is firmly convinced of the total moral virtue of its position, demands that the much larger general public bow to its demands–no matter what those demands might be.

A while ago, there was a movie entitled Wag The Dog.

In Madison, Wisconsin, we see the tail of public employee unions attempting to not only wag the dog of the Wisconsin people, but decide which road down which that dog (or badger, as the case may be) will walk.

Let that sink in for a minute, before you continue Sharpie-ing the Hitler moustache onto Wisconsin Governor Walker’s picture.

The fact is, the fundamental fact of live of organized labor is an adversarial relationship between the union, purporting to represent “the workers,” and on the other side of the table, “the management.”

But in a working republic based on democratic principles, the ultimate management of the government is the people themselves.

Therefore, a public employee union is by definition in an adversarial relationship with the people–or, in other words, acting in opposition to the public interest. THAT is why public employee unions should never be allowed to exist, and where they currently exist, they should be immediately disbanded.

There is a place for organized labor. There are private companies that do attempt to unfairly exploit workers. But, it must be recognized that public employee unions will always–ALWAYS develop to the point where they attempt to unfairly exploit their employers–the public. This has happened in Wisconsin, and has happened all throughout this country.

“The economy is in a much stronger position to handle” rising oil prices, Tim Geithner said today during a Bloomberg Breakfast in Washington. “Central banks have a lot of experience in managing these things.”

From Bloomberg via Zero Hedge.[*1]

We Are So Screwed.

Recall, if you will, Timothy Geithner is the guy who was unable to comprehend the nuances of TurboTax.

Op-ed: Raise your glass to some good news on alcohol[*1] .

Holding everything else equal, we found that someone who drinks earns 10 percent more on average than someone who does not. We also found that men who reported going to a bar at least once in the last month earn an additional 7 percent. That’s 17 percent more money than people who don’t go out or drink.

There are some people, like my Snookums, who can easily slide into social interactions with strangers without requiring the “social lubricant” of alcohol. And then there are the rest of us. 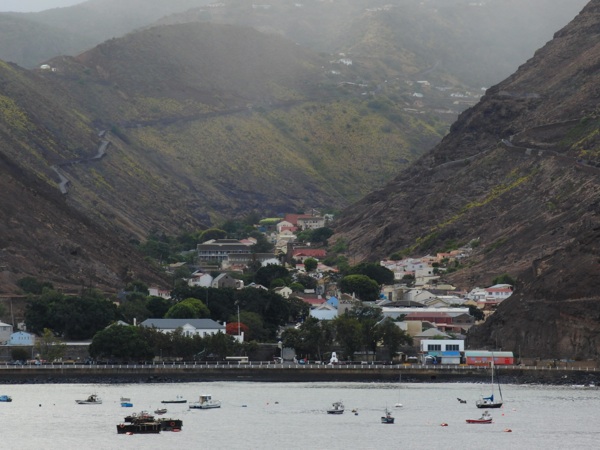 Snookums and I loved St. Helena–supposedly the most remote island on Earth, whose only connection to the rest of the world was the once-monthly British Mail ship, the St. Helena.

According to this article[*1] , St. Helena is getting an airstrip.

On the one hand, bully for them! On the other hand, I hope it doesn’t ruin the beautiful, simple charm that the village of Jamestown had when we visited it a couple of years ago. The Saints–residents of St. Helena–will be delighted, though. They really, really, really resented the decision of the previous British Government to cancel plans to build the airport.

While the spoiled children in Wisconsin and their union/Democrat enablers continue their temper tantrum over actually being asked to pay for a portion of their retirement and medical care (horrors!), putting up to 12 thousand Wisconsin state employees’ jobs at risk,[*1] you may have missed a few other happenings:

Iran is sending ships through the Suez Canal to further menace Israel.[*2]

Meanwhile, high speed rail will SOLVE ALL OUR PROBLEMS!![*3] (Oops, sorry, no, it won’t. It’s a silly-ass idea. Works in Japan. Won’t work in the USA.)

(Economic) bubbles are bursting around the world . . .[*4] has our golden age ended? Only if we do not change— and I’m not referring to the Soros/Obama-cling-bitterly-to-Nineteenth-century-“progressive”-collectivist/statist-public-policy-solutions kind of “change.”

And yes, unions ARE thuggish organizations.[*5] They really can’t help it. It’s what they are. Their primary weapon is intimidation. When that fails, they start the violence.

Fire ‘em all and institute vouchers.[*6] Sounds like an excellent plan to me.

A good question: After Wisconsin, how do Democrats argue against a GOP government shutdown?[*11] Glenn Reynolds replies: “”shamelessly” would be my guess.”[*12] Yeah. That word should be a part of the official name of the Democratic Party–er–the Shameless Democratic Party.

Depressed yet? No? Then you don’t understand what’s going on. Sigh.