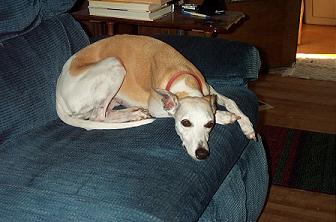 I had to put my dog Biscuit to sleep last week. She was a fifteen-year-old whippet and the sweetest dog in the world. She’d been slowing down for years though, and had gotten to the point where she could barely navigate the stairs to get to her doggie door downstairs. Probably blind in one eye, and losing her hearing, things were generally going downhill for the old dog. It was time to let her go. I miss her.

My el-cheapo 2-year-old laptop is dying. So I’m in the market for a power laptop suitable for gaming . . . 2 GHz processor, fast hard drive, lots of memory are the base criteria. Anyone have any ideas?

Victor Davis Hanson[*1] , a Medary.com favorite, gets it right again:

So how do we make sense of what seems so nonsensical? Rather easily—just keep in mind four general talking points about America’s recent role in the world and most things gradually becomes clearer.

Point One (for Americans): My own flawless three-week removal of Saddam Hussein was ruined by your error-prone postwar peace.

Point Two (for Middle Easterners): We are for democracy—unless you Americans help us obtain it.

Point Three (for Europeans): We are privately for and publicly against what you do.

Point Four (for everyone else): When angry at either the United States (or yourself,) just blame the Jews in America, and Israel abroad.

Sometimes in these crazy times, that is all you need to know.

Heard this morning on CNBC.

I’m not entirely sure what this means, but I’m pretty sure it’s not a good sign.

Or, the Iranians are messing with the Western mind. Either way, they keep ratcheting up the tension level. They obviously don’t think they’re anywhere close to pushing the West over the edge, so they keep pushing.

Democracy: “two wolves and a sheep deciding what to eat for supper.”

The self-congratulatory worship of the word “democracy” (Democratic Party, et al) is sadly deluded. Democracy without limited government is tyranny.

The goal of the West in Iraq should not be democracy. It should be liberty[*1] .

Liberty is generally thought of as a condition in which an individual has immunity from the arbitrary exercise of authority; it often also implies the right to exercise political rights such as standing for office.

Democracy gives you Hitler. Liberty takes Hitler down when necessary.

Update: Maybe we need to go with the title without the sarcastic inflection. Looks like we got Al Qaida’s #1 bombmaking expert, Abu Khabab al-Masri[*1] . My apologies to the CIA . . . this time.

Two Pakistani officials told The Associated Press on Saturday that the CIA had acted on incorrect information, and al-Zawahri was not in the village of Damadola when it came under attack. Al-Zawahri is ranked No. 2 in the al-Qaeda terror network, second only to Osama bin Laden.

“Their information was wrong, and our investigations conclude that they acted on a false information,” said a senior intelligence official. His account was confirmed by a senior government official, who said al-Zawahri “was not there.”

Why oh why do we tolerate this fetid cesspool of incompetent spooks to fester? There’s an old saying, from World War II, or maybe earlier:

One hundred “atta-boy’s” are cancelled out by one “aw, shit.”

The CIA seems prone to very public, very damaging mistakes. I’m just a guy with a computer in the middle of the country, but it seems to me that we have other organizations (NSA, DIA, etc.) which seem somewhat more competent at what they do. At least, the mistakes they make are not nearly as public. Also, those other agencies don’t seem to be in a perpetual state of war with the elected government of the U.S. Let’s transfer intelligence operations from the incompetent CIA to these other organizations, and shut the doors down at Langley.

Remember all the “George Bush is in a Bubble” talk around Christmastime? No? Sorry. Well, anyway, the BDS[*1] meme of the day back then was that W was isolated from the real world–a “boy in the bubble” so to speak. Nonsense like most BDS babble, but there you have it.

On the other hand, The American Thinker reports that the NY Times is erecting a real, tangible bubble[*2] for its columnists:

The Times is refusing to allow email from non-subscribers to its star columnists. That’s right, you have to pay in order to be able to respond directly to the bloviators.

This monograph[*1] from the U.S. Army’s Strategic Studies Institute [*2] basically boils down to:

A quote from the monograph:

What more should the United States and its friends do? Ultimately, nothing less than creating moderate self-government in Iraq, iran, and other states in the region will bring lasting peace and nonproliferation. This however, will take time. Meanwhile, the United States and its friends must do much more than they are currently to frustrate Iran’s efforts to divide the United States, Israel, and Europ from one another and from other friends in the Middle East and Asia; and to defeat Tehran’s efforts to use its nuclear capabilities to deter others from taking firm action against Iranian misbehavior.

It continues on in that rather depressing vein for 300 pages. I’m slogging through it.

Knee-jerk critics and supporters of the Bush foreign policy need to read this.

The time for partisan political games is past, but most everyone playing those games haven’t figured it out yet, much to the peril of our civilization, let alone our “national security”.