We’ll start on a light note. It’ll go downhill fast from there.

Six game road trip starts at Montana [*1] — Go Rabbits! Union Thuggery in Michigan:
Steve Crowder To Union Thug: Either Fight Me In a Sactioned MMA Brawl, Or I’ll Send You To Jail [*2] —
The Battle of the Bads [*3] — Union violence is not the exception–it is their normal mode of operations. It was also the normal mode of operations for their ideological bretheren, the Russian Soviets and the German National Socialists.

Support Clint! [*4] — When you’re supporting a cause whose advocates stoop to attacking hot dog vendors, you might be on the wrong side.

Michigan protests: Are the media ignoring thuggery? [*5] — Wherein we learn that Steven Crowder, like many a rape victim, was asking for it. No, Erik Wemple, the media isn’t ignoring thuggery. The media is advocating for thuggery with their selective and biased coverage of the events of the day.

The Epistemic Closure of progressives to their violent union thugs [*6] — If people are beaten up in the streets, and the media doesn’t report it, did it really happen?

And the rest of the links:

Dem. Rep’s Son Caught on Voter Fraud Vid Pleads Guilty to Assaulting Girlfriend [*7] — And . . .
Clumsy Clifford: Jim Moran Says His Son “Accidentally” Bashed His Girlfriend’s Head Into a Trash Barrel, Inadvertantly Breaking Her Nose and Unwittingly Fracturing Her Skull [*8] — But he’s a Democrat, so it’s no big deal, because he cares more than you do.

Sen. Menendez Had an Illegal Alien Sex Offender Working as an Unpaid Intern; Napolitano’s Department of Homeland Security Instructed ICE to Delay Arresting Him Until After Menendez’s Reelection [*9] — This is what corruption looks like: “(Department of Homeland Security–i.e. Janet Napolitano) instructed them not to arrest Sanchez until after the November election, one U.S. official told the AP. ICE officials complained that the delay was inappropriate, but DHS directed them several times not to act, the official said.”

What kind of negotiator is President Obama? [*11] — This assumes that Obama is negotiating in the first place. As noted in this article, there is little evidence over the course of his career that Obama has ever successfully negotiated ANYTHING with a Republican office-holder.

No. 13 Lady Vols lose Carter for rest of season [*12] — Another challenge for the post-Summitt Lady Vols.

The Forcing Conundrum [*14] — For those few still interested in the science of climate.

Delta Looks to Virgin Atlantic to Bolster London [*15] — No comment, other than Delta seems determined to take over the world.

Meet Frank Yost [*16] — The story of a Major League Baseball manager who’s too embarrassed in his team to use his real name at Starbucks.

U.S. Terrorism Agency to Tap a Vast Database of Citizens [*20] — What could go wrong? I mean, organized labor unions (see above) are the strongest backers of the current Administration. No worries.

Taxes Are Much Higher Than You Think [*21] — The AVERAGE American pays around 40% of every dollar they earn in taxes. Not the 1%, but the average American. So tell me again how it’s necessary for Obamacare and other “progressive” leftist schemes to raise those taxes further.

Let’s Give Obama Everything He Wants But Get Something Real In Return [*22] — Taxes are not the problem. Spending is the problem.

Obama, Boehner to Take on Blue Model Funding Source? [*24] — Obama isn’t going to do anything to threaten his “progressive” leftist base.

US economy could withstand brief fall off ‘cliff’ [*25] — The “fiscal cliff” is an invention of Ben Bernanke. Its purpose is to scare Republicans into (again) doing the stupid thing and capitulating to the “progressive” leftist Democrats. 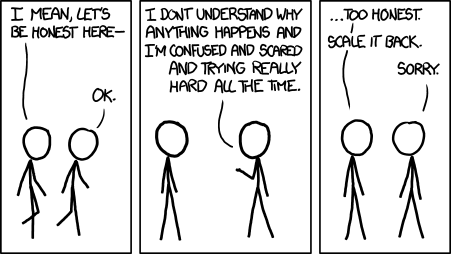 Site News: I’m contemplating a migration from the current platform (Geeklog) to WordPress. Might start taking that on after the new year. Also, there’s some travel journals that need posting–these should be forthcoming “real soon now.”

Now, on with the whip:

Senator Jeff Sessions: Here’s A Crazy Idea, Maybe We Should Follow Constitutional Procedures And Not Backroom Deals To Handle The Fiscal Cliff [*2] — What? Have our Congressional representatives actually, er, represent us? Have some modest expectation that our representatives will actually follow the rules we set up for them to follow (i.e. the Constitution) in doing so? That’s just crazy talk! You must be a conservative or something. What a nutjob!

Ezra Klein: Often Wrong, Never In Doubt — The visceral hatred of freedom of association and freedom of employment by the leftist “progressives” is, or should be, very instructive. Of course, these are the same people who like pointing guns at people and taking their money, so that they can make themselves feel virtuous by giving that money to somebody else.

It is not a virtue to be generous with other people’s money.

Union Goon Who Assaulted Steven Crowder Identified [*4] — If you go around saying you’ll start a civil war over some piece of legislation, don’t be surprised if you eventually get a civil war. “If you go carrying pictures of Chairman Mao, you ain’t gonna make it with anyone anyhow.”

Intelligence Report Challenges Declinist Consensus [*5] — But the good news is that the USA won’t be the world’s only superpower in 2030. That’s a good thing, right? (Actually, judging from the current political leadership, it’s hard to argue that it’s not a good thing.)

Michigan Unions’ “Freeloader” Myth [*7] — Seems like a simple enough concept–if you don’t pay union dues, you don’t get representation from the union (and therefore have to deal with your employer yourself). This is actually good for unions–it keeps them focused on what they’re supposed to be doing–mediating employer-employee relations.

The Seventh Circuit Keeps “Bear” in 2nd Amendment [*8] — I’m perpetually amazed that “progressive” leftists can read the plain words of the Constitution and somehow twist them to mean the exact opposite of what they say. Apparently the Seventh Circuit court, on this day anyway, agrees with me.

http://www.volokh.com/2012/12/11/the-seventh-circuit-keeps-bear-in-2nd-amendment/ [*9] — I’m for ’em. The concept of private property is a fundamental building block of civilization. Strange how “progressive” leftists focus on it as somehow an evil, given how collective ownership always–ALWAYS turns out in the end. Of course, “progressive” leftists aren’t real big on learning from experience or history. Forward!

Costa Cruise Ship Hits Pier; Leaves 24-Foot Gash in Side [*10] — So, ask me why I don’t intend to cruise on Costa any time soon.

Too Much TV: Joel Nielsen [*11] — An interview of Kent State athletic director Joel Nielsen by the irreplacable Terry Vandrovec.

My Favorite Stories Of 2012 [*13] — From the wildly potty-mouthed but still amusing writer Chuck Wendig.

Noah’s Biblical Flood Actually Happened, Says Famed Archeologist Who Found the Titanic [*14] — Um, yeah. Not sure why I clicked on this one. Although the picture in the article of penguins outside the Noah’s Ark replica is pretty darn funny.

Union Members Covering Selves in Glory Again [*15] — Normally, taking a swing at a comedian while protesting against some government silliness would be news. But if the comedian is also a conservative, well, er, not so much, I guess.

“Better Off On Benefits” [*16] — Here’s the end result of the “progressive” leftist urge to give somebody stuff that belongs to other people. You make the recipients of that giving dependent and unable to support themselves. If you’re goal is power, that’s a good thing, but if you’re actually trying to make people’s lives better, it’s a disaster.

Accuse the Accusers: @scrowder Gets the Left’s ‘Plate Glass Window’ Treatment [*17] — How dare that conservative comedian put his face where my fist could hit it?!? Burn the conservative witch!

Things We Hate About Air Travel [*18] — Just about everything other than the “getting half-way across the country in a couple of hours” thing.