Memorial Day in these United States.

Contemplate the saying “Good people sleep peaceably in their beds at night only because rough men stand ready to do violence on their behalf.”

Today is the day when we remember those rough men (and rough women, nowadays) who have given their full measure so that we may sleep peaceably in their beds.  Most of those rough men and women did not wish to die, but they did.  They died for us, as some who are called to serve must do.

This is why we honor them, on this day.  Actually, they deserve honor on every day, but this one is set aside.  For them.

Thank you, all you rough men and rough women, active and reserve, serving and retired, living . . . and passed on.  You are honored and remembered.

Nordhaus examines five kinds of global-warming policy, with many runs of DICE for each kind. The first kind is business-as-usual, with no restriction of carbon dioxide emissions—in which case, he estimates damages to the environment amounting to some $23 trillion in current dollars by the year 2100. The second kind is the “optimal policy,” judged by Nordhaus to be the most cost-effective, with a worldwide tax on carbon emissions adjusted each year to give the maximum aggregate economic gain as calculated by DICE. The third kind is the Kyoto Protocol, in operation since 2005 with 175 participating countries, imposing fixed limits to the emissions of economically developed countries only. Nordhaus tests various versions of the Kyoto Protocol, with or without the participation of the United States.

The fourth kind of policy is labeled “ambitious” proposals, with two versions which Nordhaus calls “Stern” and “Gore.” “Stern” is the policy advocated by Sir Nicholas Stern in the Stern Review, an economic analysis of global-warming policy sponsored by the British government.[*][*2] “Stern” imposes draconian limits on emissions, similar to the Kyoto limits but much stronger. “Gore” is a policy advocated by Al Gore, with emissions reduced drastically but gradually, the reductions reaching 90 percent of current levels before the year 2050. The fifth and last kind is called “low-cost backstop,” a policy based on a hypothetical low-cost technology for removing carbon dioxide from the atmosphere, or for producing energy without carbon dioxide emission, assuming that such a technology will become available at some specified future date. According to Nordhaus, this technology might include “low-cost solar power, geothermal energy, some nonintrusive climatic engineering, or genetically engineered carbon-eating trees.”

Here are the net values of the various policies as calculated by the DICE model. The values are calculated as differences from the business-as-usual model, without any emission controls. A plus value means that the policy is better than business-as-usual, with the reduction of damage due to climate change exceeding the cost of controls. A minus value means that the policy is worse than business-as-usual, with costs exceeding the reduction of damage. The unit of value is $1 trillion, and the values are specified to the nearest trillion. The net value of the optimal program, a global carbon tax increasing gradually with time, is plus three—that is, a benefit of some $3 trillion. The Kyoto Protocol has a value of plus one with US participation, zero without US participation. The “Stern” policy has a value of minus fifteen, the “Gore” policy minus twenty-one, and “low-cost backstop” plus seventeen.

Taking no position on the correctness (or lack thereof) of the underlying climate science, and accepting the Nordhaus economic analysis, it sure looks to me like the best policy going forward is:

1.  Institute a worldwide tax on carbon, which increases as time goes on, and
2.  Use the proceeds from that tax to research alternative energy and carbon sequestration technologies.

Of course, given the history of taxation and simple human nature, what are the chances of the proceeds of #1 actually going towards #2, especially outside the developed world?  Personally, I’d put the chance at vanishingly close to zero.  Still, even though I am skeptical of the underlying climate science, it seems to me to be a reasonable policy to begin to wean ourselves from dependence on hydrocarbons for energy production, with fusion power being the holy grail there.

Having said that, the global correction in the price of oil we are currently undergoing is having the economic effect of #1–it is effectively (in an economic sense) a tax on the use of carbon.  As such, you would think that the climate change advocates would be loudly saying that the skyrocketing cost of oil is a good thing.  Perhaps they are, and I’ve been missing it.

If you knew that a recent Zogby International survey found 59 percent of the respondents described themselves as “fiscally conservative and socially liberal,” and if you were a head of a political party wanting to put together a winning platform, what would you do?
. . .

At the same time, Democrats cannot seem to get it through their heads that most Americans do not want higher taxes and more nitpicking government regulations on how to run their lives. They are confusing voter disgust with Republican mismanagement as support for their left-wing agenda.

The Republicans only need to read two new books to know what to do. The first is by the exceptionally creative political thinker and activist, Grover Norquist, titled “Leave Us Alone.” The second book, by libertarian scholar and activist David Boaz, is titled “The Politics of Freedom.” The authors present opposite sides of the same political coin. They are both limited-government optimists, and both spend the bulk of their time using different strategies to promote their agendas.

I’m pretty much with the 59% majority, I guess.  Leave me alone, and leave everybody else alone, too.

Joe Lieberman (who is now an Independent after the Democrats tried to throw him under the bus in his last election) has some comments[*1] :

This was the Democratic Party that I grew up in – a party that was unhesitatingly and proudly pro-American, a party that was unafraid to make moral judgments about the world beyond our borders. It was a party that understood that either the American people stood united with free nations and freedom fighters against the forces of totalitarianism, or that we would fall divided.
. . .
A great Democratic secretary of state, Dean Acheson, once warned “no people in history have ever survived, who thought they could protect their freedom by making themselves inoffensive to their enemies.” This is a lesson that today’s Democratic Party leaders need to relearn.

The signal trait of Democrats today, in areas from economics to climate science to world politics, is a steadfast refusal to actually deal with the whole body of the facts of the matter, instead preferring to operate in a world of knee-jerk reaction and soundbite/bumpersticker philosophy.

Gasoline is expensive in large part because supply has not kept up with world demand–this in part because the Democrats won’t allow new domestic American supplies to come to market–they prefer polar bears to your summer vacation.

In case you’ve missed it, Iraq is now almost totally won–the Iraqi government has asserted control even over the fractious Sadr City neighborhood of Baghdad.

The inexorable march of global warming has hit  what even the alarmists admit is at least a decade-long plateau[*2] , or possibly even a sharp downturn into global cooling.  There’s just a bit of difference between a hothouse Earth and one wrapped in an Ice Age, but this is covered up by the terminology shift from “global warming’ to “climate change” (as if “climate” is some static state of events that never changes except for those nasty humans).

Unless you bypass the mainstream media, you probably haven’t heard any of that before.  What else have you been told by the (overwhelmingly Democrat/leftist) mass media, which is at best incomplete, and at worst wholly inaccurate?

Worthy of note, this post from a while back from the American Thinker[*1] :

And where is the Left on this issue when a Republican Senator or Congressman calls for privatization of Social Security? They are aligned with Hillary’s and Obama’s position of refusing to look at the facts when people point out the bankruptcy of leftist contrivances like universal healthcare.

In 1947 the Left discovered the Separation of Church and State in the Constitution. This eventually led the benevolent Left to protect us from too much exposure to religion by prohibiting prayer in public schools. Ironically, this new separation from religion “for our own good” has resulted not simply in schools without prayer, but education without morality. But of course, the problem is that the Left is still teaching a morality; it is simply not a Christian one.

Those on the Right tend to believe that people are in fact quite inconsistently good, honest, kind, and well-meaning.  This is why the American Founding Fathers sought to strictly limit the amount of power that we gave to our government.

Limits to the powers wielded by politicians and governments are almost always better than expanding those political powers, because the expansion of those powers tends to have negative unexpected consequences that the Left never anticipates.  A life without edges tends to toss a lot of people right off of the edge, in the name of “equality” and “fairness.”

You can never guarantee either.  The best that flawed Man can do is strive to provide the best environment for those who choose to may seek to better themselves.  That system, from empirical evidence, is truly free-market capitalism tempered by a truly limited government of tightly enumerated powers.

We don’t really have either any more, anywhere on Earth.  More’s the pity. 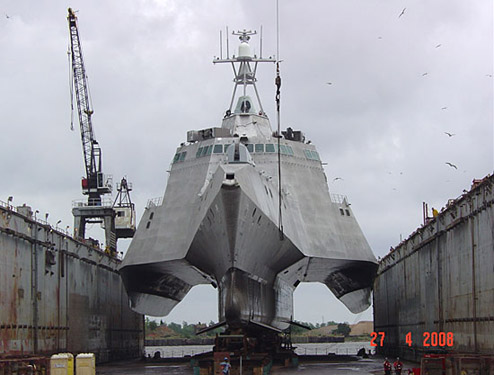 The Littoral Combat Ship[*1] (via Gizmodo[*2] ), specifically the (soon to be USS) Independence:

You can almost imagine this beastie sailing along in some Star Wars sequel (cue Imperial March music).

Rock Port only has a population of 1,316 but last week they threw the switch as America’s first ever community completely powered by the wind.

“With wind you need a windy area. Fortunately for northwest Missouri, the bulk of it is here, but there are other places where this can be done, ” Carnahan said.

Yes, northwest Missouri is windier than central Missouri. It takes winds of up to 9-miles per hour to get those blades spinning. Rock Port is now powered by four wind turbines. In all, 79 turbines are operational in northwest Missouri.

I’ve noticed the growing forest of white windmills up on the bluffs overlooking Rock Port as we drove to and from the Ancestral Home (i.e. South Dakota).  I have noticed that more often than not you see windmills that are not turning.  Hopefully they can keep these ones running, and it’ll pay off for them.

Some helpful hints from Cruise Critic[*1] , with helpful little notes on such things as:
Cruising Segments
How to Pick a Cruise Line
Make a Date
How to Pick a Cabin
What to Pack