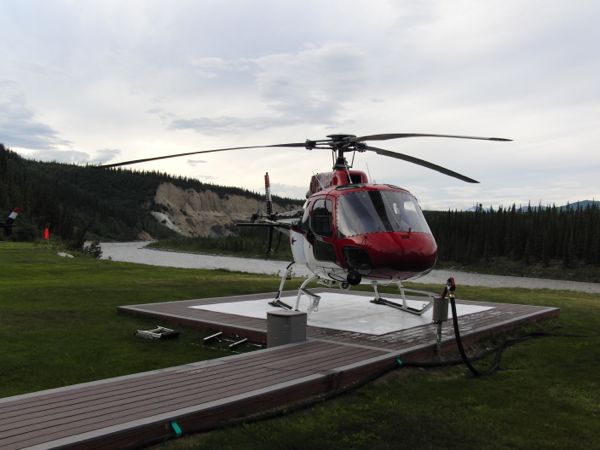 Once again we had to wake up early and today we woke up at 5:45 AM in order to be in the lobby (after taking the shuttle) by 7 PM. Era Flightseeing was there to pick us up for our heli-hiking trip. We weighed in at the helicopter office and received our safety briefing. One other couple was on the tour with us along with Jeff, the naturalist/hiking guide. We piled in the helicopter and Snookums was the co-pilot once again. This time she had plenty of room but it was only a short 15-minute flight to the tundra.

We were not in Denali National Park, but it looked just like it with all sorts of various types of vegetation and hills and mountains and kettle ponds (pools formed by glaciers). While the rotors were still moving, we all carefully exited the helicopter and stayed down with one knee touching the ground until the helicopter flew off. We immediately spotted Dall sheep on a far off mountain ridge that looked like white dots with the naked eye, but Jeff had a spotting scope on a tripod that he set up.

The tundra is very spongy, yet the soles of our shoes did not get wet. The definition of tundra is “A treeless area between the icecap and the tree line of Arctic regions, having a permanently frozen subsoil and supporting low-growing vegetation such as lichens, mosses, and stunted shrubs.” Besides seeing lots of different kinds of lichens, mosses and flowers, we saw arctic ground squirrel, caribou (but only with Jeff’s scope), a woolly caterpillar, horned lark (Filbert spotted this bird), pika (a rodent that Filbert spotted) and two golden eagles flying above.

The hike was not very strenuous, but it was a different kind of walk since there were many rocks and various levels of moss and animal holes (squirrels and marmots) and since your feet would sometimes sink in a couple of inches and other times they wouldn’t. We hiked down and came upon another flat area and that is when Jeff used the satellite phone to call for the helicopter to pick us up. In the meantime he spotted a big bull moose in the distance and put it in his spotting scope. Neither of us could ever find it, though.

The helicopter came and with its rotors turning, we loaded in one by one. We were told to stay with one knee on the ground until it was our turn and to also hold onto the backpacks that were on the ground. It was VERY windy and moss and dry grasses were blowing around. We all got in and then Jeff gathered all of our backpacks and put them in the helicopter and then we took off. Jeff told the pilot were to fly so that we could see the bull moose and Snookums did see it from above, but in her opinion, that still didn’t count as a moose sighting!

By the time we got back to McKinley Chalet Resort, it was past lunchtime so we took the shuttle back to our room and changed shoes before taking the shuttle back to then walk across the street to Prospector’s Pizza and decided to split a pizza that had reindeer sausage on it. Snookums also ordered a side salad and at the very end of eating it she found two clumps of clay/dirt, each the size of a pea. She also saw “gunk” stuck to the inside of the water carafe and pointed out both things to the server. The server explained that the lettuce was grown a few miles away on an organic farm and Snookums countered that it should have been washed better. When it was time for the bill, the salad had been removed.

Before returning to our room, we decided to take the shuttle to the Denali National Park Visitor’s Center and bookstore. Both were underwhelming and we took the next shuttle back. When we got back to our room, we had a note under the door from Laura explaining that they saw a grizzly bear chase a moose and her calf and also saw a big bull moose with a full rack of antlers (i.e. Bullwinkle). Laura and Snookums have been wanting to see Bullwinkle and now Laura has.

When it was time for dinner we took the shuttle and then walked across the street to the Thai & Chinese Food trailer for dinner and Snookums enjoyed spicy green curry with chicken and Filbert ordered the extra spicy chicken with ginger which he declared as being too hot to really enjoy, but he ate it. The ambiance isn’t anything special (picnic tables on the dusty gravel lot), but the food was delicious and for $10 each, a real bargain, too! Filbert was feeling the burn and decided that ice cream was needed. He ordered a scoop ($3.95) for us to share and asked for two spoons and the server thought he wanted two scoops ($5.95). We managed to eat it all.

We walked back to the lobby and waited for the shuttle to take us down the hill since Snookums was so tired. We were asleep by 10. Filbert woke up at 11:15 when the power went out and his sleep apnea machine stopped. Snookums called the front desk using her cell phone and was told the entire canyon was out which was a 20-mile wide swath. They anticipated it to be out for 3 or 4 hours but didn’t know why. They offered to move us to the main lodge and feed a power cord through the window from a generator outside the window, but Filbert decided to stay put since it was going to be hard to pack up and move in the dark, even with the remnants of sunlight left. Snookums went back to sleep and Filbert dozed. The power came back on at 3:14 AM and somehow Snookums woke up but since Filbert was asleep, Snookums just rolled over and went back to sleep.

Our bags had to be out by 9 AM which wasn’t too bad, but we had to vacate the room by 10 AM although we weren’t leaving the lodge until 11:45 AM! After the power outage last night, no one was in a very good mood. John and Laura had returned from their evening hike right before the power outage and were going to shower, but couldn’t since there was no water due to the power outage. Anyway, we put the night behind us and carried on in true hardy Alaska fashion!

It was VERY windy today and that made us extremely thankful for the great weather we had while in Denali. The four of us walked to Salmon Bake for a filling breakfast and then bought food for the 8-hour train ride to Anchorage. (Snookums bought a Subway sandwich and Filbert bought some beef jerky and almonds at one of the three tiny grocery stores in Healy.)

The train ride was just a lot of trees and no moose and was very long. When we made it to Anchorage we were the first ones off the train and while Filbert went to the room, Snookums went to the front desk to get HHonors Gold perks (free internet, free water, free breakfast). When she got to the hotel room, she realized Filbert was just standing there and he was showing her the dirty standing water in the bathtub! A phone call to the front desk was required to get a new room and after getting situated in the new room, we roamed downtown Anchorage in order to turn in three coupons for free stuff. Three magnets later, we went to a liquor store and Filbert bought two bottles of local beer and then we bought elk gyros ($6.50 each) from a sidewalk vendor. The homemade tzasiki sauce was outstanding and it was a great dinner.