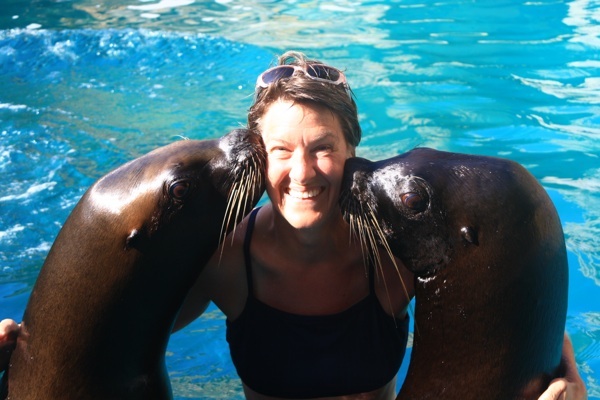 Snookums, Filbert and Judy went on the “Sea Lion Encounter” shore excursion. We took a 30-minute bus ride to Cabo Adventures where they have dolphin and sea lion encounter. Snookums and Filbert swam with dolphins a few years ago in the Bahamas so this time we chose the sea lion adventure. Plus, Filbert does a great imitation of sea lions (and has even had the sea lions in San Francisco on Pier 39 answer in return!)

More after the jump . . . There were 10 of us that signed up for the sea lion encounter. Two sea lions, one of whom was pregnant and ready to deliver at any time, were in a small pool and we all got in and stood in the shallow end by the wall. The water was extremely cold and Snookums didn’t have her wetsuit, but she braved the frigid temps anyway. Judy thought the water was too cold and wasn’t too excited about interacting with sea lions so she sat on the side of the pool.

We learned about sea lions and got to constantly pet them. Their flippers are very strong and frequently their flippers pushed up against Snookums when they turned to go the other direction and forced her closer to the wall. She was amazed at their strength. They also have “toes” and “toe nails” on their hind leg/flipper-thingies and that was neat to see. We were kissed by the sea lions and they jumped over us and other tricks were done, too, and the photographer took pictures of everything. (The photos were for sale — $25 for one or $99 for a CD of 10. We helped the economy by choosing the $99 deal.)

After our 30 minutes or so in the water it was time for the buffet lunch. It was pretty good and had an interesting assortment of food – delicious onion rings, chicken nuggets, cheese enchiladas, spaghetti, ham and cheese wraps, poblano pepper chicken, guacamole, chips, fresh fruit and a couple of desserts. Judy and Snookums really enjoyed the cheese enchiladas, guacamole and onion rings and Filbert liked the ham and cheese wraps and onion rings. We were sitting under a plastic roof and kept hearing strange noises. We looked up and could see feet and a long tail and realized that iguanas were above us. There was also a small aviary with tropical birds. Snookums let one of the birds kiss her and was very surprised that the bird actually had a tongue between its very long beak. Snookums also held the bird and it was quite heavy. Filbert wasn’t interested in a bird kiss or in holding the bird.

When we got back to the pier we hurried back to our cabins for a quick change out of wet bathing suits so that we could go across the street to Sam’s, WalMart and the mall. Since Filbert has lost so much weight, he needs to replace his two heavyweight cotton shirts. We already got him one in Huatulco, but we’re still on the hunt for a second one. Sam’s Club actually had some, but not in his size. The Puerto Vallarta Sam’s Club looked pretty much like a US one and gave food samples, too. Judy and Snookums had a delicious two layer dessert that was moist, rich chocolate cake on the bottom and creamy flan on the top. Filbert didn’t partake due to his diet.

We then went to WalMart and didn’t find anything but had to spend time at the $13.90 peso store (like a dollar store) that was inside the WalMart. After that we went to the upscale mall that was basically deserted. The big department store had some shirts, but not the right color. After walking all around the mall, we decided to head back to the ship.

After leaving Puerto Vallarta, we were treated to one of the best dolphin spottings we’ve ever seen while at sea. The dolphins suddenly appeared, and they were everywhere. Fortunately, Filbert was out on the balcony, working on picking out photos for this journal. Unfortunately, that means that the dolphins took him by complete surprise. They were mostly playing in the stern wave of the Navigator, leaping and splashing and generally looking like they were having way too much fun. There were a couple of dozen of them at least and they frolicked around the ship for at least five full minutes. Mom enjoyed watching them and Dad decided he needed to come outside, too. (Our cabins were next to each other which also meant our balconies were, too.) However, Dad put his hand on the sliding glass door while it was not in a locked, open position and when it moved unexpectedly, he also moved unexpectedly. That meant that he went “thud” on the balcony. Snookums ran next door and found that he was okay and ended up with some slight bruising on his arms and a little black eye. Filbert showed him the dolphins on the camera, so he got to see them, too.

After dinner, which Filbert didn’t attend due to his diet (and that meant that every waiter had to ask where he was!), Mom, Dad and Judy attended Marty Henne’s show called “Songs you Know by People you Don’t” and said it was fantastic.

Next: Kayaks in Cabo!