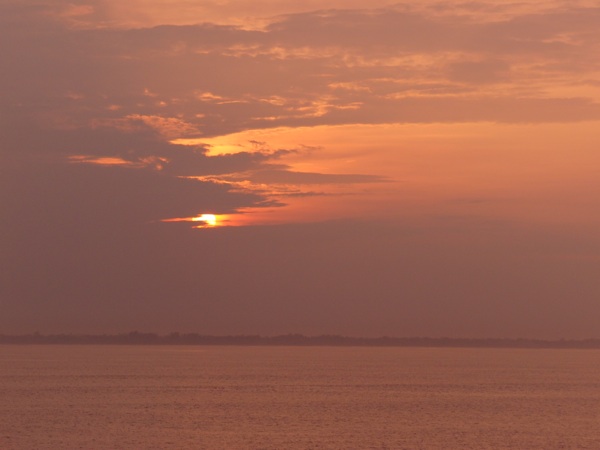 Chiapas is the southernmost state in Mexico and Puerto Chiapas is one of three ports in the state but the only one that handles cruise ships. Puerto Chiapas was built in 2005 and around 11 or 12 cruise ships dock each year. The port has two pyramid-type buildings with thatch roofs. The port area was nicely landscaped, including a fountain between the main pyramid port terminal building and the ship dock. One pyramid houses various gift shops and the other has an outdoor pool (mostly used by crew members). The closest town is Tapachula, 30 minutes away, which is close to the border of Mexico and Guatemala.

Filbert, Snookums and Bill took the guided tour to Tapachula, population around 200,000. Unfortunately the guide didn’t use the microphone on the bus until the tour was about 90% complete, and this was after a person asked her to either speak up or to stand in the middle of the bus! We didn’t need to hear her anyway to see the fields and rural countryside for the first 20 minutes of the ride. Then we got to the outskirts of Tapachula and saw a Home Depot, Blockbuster, Burger King, Sam’s Club and just about every other American chain establishment. It looked “nice” for a Mexican city and is one of the richest cities in Mexico on a per capita basis.

The tour had two stops. The first one was at the town’s cathedral which was very modern and really not that interesting. The local handicraft store was across the street and probably owned by the tour company, which was why this was a 30-minute stop. A waste of time, from our point of view, but we suppose the locals have to try to extract money from us, don’t they? The second stop, which was much more interesting, was in town at the Central Park. We had one hour to walk around and see things. Just off the central square, a local pharmacy was having some kind of promotion, and had their mascot there–in humongous inflatable version, man-in-a-mascot-suit version, and small, foot-long stuffed toy versions. This amused us all greatly.

We walked a block or so off of the main central plaza to the San Sebastian Market, an open-air market with many, many individual vendors selling pastries, spices, clothing, vegetables, meat, fish, etc. The meat section was interesting since the hunks of chicken and beef were lying out in the open and the vendors were swatting away the bugs and flies with dirty rags. The rags frequently touched the meat to make it even more sanitary! By the way, the temperature on this very sunny day was around 95 and the humidity was probably 85% – perfect conditions for storing meat out in the open.

We tried to buy Filbert a Mexican shirt, but the vendors didn’t speak English and our attempts at “blanco” (white) weren’t being understood. Since he lost so much weight, his old Mexican shirts are huge so we were hoping to buy one on this cruise.

On the way back to the bus Bill had to buy one of the small stuffed toy pharmacist mascot dolls for a friend of his who is a pharmacist. We wonder about Bill sometimes. But probably no more than he wonders about himself, we suppose.

We were amazed by the number of people we saw on a Monday around 11:30AM in the park and market. The guide told us that this was normal and that on Sundays the park would be completely filled with Guatemalans looking for work. There were two tour buses of tourists from the ship and we were definitely being stared at. Tapachula isn’t a tourist mecca and since only a dozen or so cruise ships dock at Puerto Chiapas, we were an unusual sight.

While we were on our tour, Judy took Dad to the port’s pyramid building and they watched the dancers for a few minutes and perused the tourist stores. There were dancers performing the entire 9 hours the ship was in port. And remember that it was very, very hot and humid.

Next: A Mexican town the name of which Snookums just simply can’t pronounce!