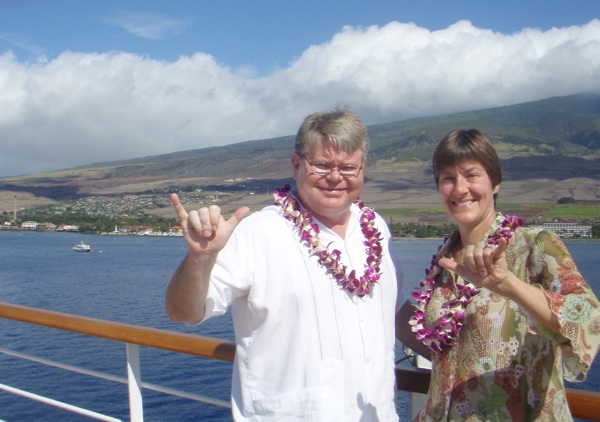 We had to go through US immigration on the ship by 8:30 AM and that’s when we finally got our passports to keep. The immigration people didn’t really seem to look at our passport photos or our faces so it went very fast.

As we approached the gangway, we were each given a beautiful pink orchid lei. We didn’t want to wear them all day so Snookums took them back up to our suite’s refrigerator with the plan to wear them to dinner the next several days.

More after the jump . . . We finally did get off the ship and explored the area right around pier 11 (HAL’s pier) since we will be coming back in January on a cruise with Snookums’s parents and sister. We found the Navatek I whale watching boat (pier 6) and found out that if we book the 3-hour lunch tour ourselves, it costs $55.80 whereas if we book it via Holland America, it costs $97. Considering it is two blocks from where we dock and we can manage to get there on our own, we’ll book it ourselves and save lots of money.

After walking around we decided to get our laptops and find a wifi spot in Aloha Tower Marketplace. We found Island Vintage Coffee and Filbert bought an iced tea and was given the wifi password. We sat outside the store and enjoyed the open-air atrium. There was also an hour-long hula show that was going which provided even more ambience while we were using our PCs. We stayed until our batteries died. Snookums’s died before Filbert’s so she got a pedicure.

We took our laptops back to the ship and decided to take the free shuttle to WalMart to get a battery for Filbert’s Casio watch. When we got to the shuttle stop, we were told that the WalMart shuttle had quit for the day (it was around 5 PM) and right then the Hilo Hattie’s shuttle drove up. Everyone waiting for the WalMart shuttle decided to go to Hilo Hattie’s since no one had any other plans. On the way to Hilo Hattie’s (a Hawaii ‘landmark’ that sells Hawaiian shirts and other things made out of Hawaiian floral material), we passed a Kmart. We spent 5 minutes in Hilo Hattie’s and then walked to Kmart. Unlike WalMart, Kmart doesn’t help you with watch battery replacement. They sell the batteries but you have to know the type you need and they don’t have the little jeweler’s screwdriver to get the watch back off. So, we didn’t get a battery there but did buy a cardboard box and packing tape to ship our books and other items home. (Just like at home, the cash register was not correct and a manager had to come help the cashier. In this case, Kmart had a promotion going where if you bought two Scotch brand packing supplies, one would be ½ price. The cash register didn’t recognize the sale so it had to be manually overwritten. This ALWAYS happens when Snookums shops!)

When we got back to the ship we decided to enjoy the local band and poolside Hawaiian BBQ rather than eating dinner in the dining room. We waited until around 6:45 PM to eat and that’s when it started raining. The BBQ (and band) was moved inside so we were still able to eat but decided it was probably the worst tasting meal of the entire cruise. We didn’t go hungry, but we were glad that hot dogs were served! The chefs on the Amsterdam need to visit Kansas City to learn how to barbecue.

We paid our $5 entry fee and watched the mandatory 9-minute video and then proceeded to walk down the hill to the bay. It was cloudy and not that warm, but we got in the water on the left side of the bay. The water was the coldest we had encountered on the trip, but we survived. We immediately saw huge fish, including a 3-foot parrot fish and other fish the same size. They grow them big in Oahu!! We also saw a 3-foot spotted eel and then we saw a 4-foot green seat turtle.

Snookums followed it for about 30 seconds until she realized she was probably going past the channel markers that marked the swift current. It was neat and Filbert thought he got great photos of it. (It’s hard to really tell what you are taking a picture of with the camera when you are underwater. It’s almost just ‘point and shoot’ since seeing the video screen underwater is tricky.) We continued to snorkel and saw lots of colorful fish. Snookums started getting cold so we got out to warm up. It had rained while we were in the water but our bag didn’t get too wet.

More pictures from the first snorkel:

Next: We go back into Hanauma Bay!