GENEVA – If you’ve ever been frustrated after an airline lost yourluggage, you’re in the good company of millions of others. An estimated30 million bags were temporarily lost by airlines in 2005, and 200,000of those bags were never reunited with their owners, according to anindustry report released Monday.

I’m happy to report that Challenger’s estimate is as loosey-goosey as they come. For one thing, he misjudges the size of the dedicated college hoops audience. In 2005, for instance, the NCAA championship game drew 23.1 million households, according to Nielsen. The year before, only 16.6 million households tuned in to the championship game, which indicates that many so-called fans have only a casual interest in the tournament. Many are happy to tune out the tournament’s biggest game if it’s a blowout, or if the matchup doesn’t interest them. Also, many nonfans and casual fans who participant in office pools experience reduced interest in the tournament as it proceeds and the teams they bet on get knocked out.

Since I’ve evolved beyond “productivity” those 40 or 50 hours or so I spent watching the NCAA men’s and women’s tournament games this weekend (and an hour or two watching the NIT to boot) had no effect–as you can easily see by how my posting here at Medary.com didn’t drop off at all . . . er . . . well . . . um . . . 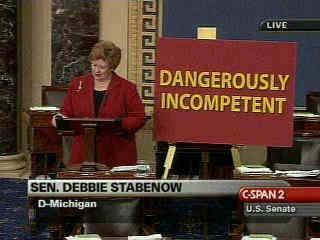 Yes, I know Senator Debbie was trying to call President Bush incompetent, but really . . . the dress color matches the sign, does it not?

Bristol, UK wants to put up a statue to the animated inventor and his ever-suffering canine sidekick[*1] :

Matthew Symonds, a local councilor in Bristol where Nick Park and Aardman Animations created the now-famous pair, said it was time to recognize the contribution that Wallace and Gromit have made to the city in southwest England.

“Everyone loves Wallace and Gromit and everyone I’ve spoken to on this matter agrees that we should thank Aardman in some way for what they have done for the city,” said Symonds.

Reports[*1] say the Shuttle won’t launch as planned in May, but now won’t launch until July. Bad sensors are blamed.

Assuming that the ultra-secret Blackstar[*2] actually exists and was retired, maybe it’s time to lift the security classifications, roll the bad boy out, and start flying to space more sensibly than putting human beings on top of giant overgrown fireworks rockets. Maybe.

You may have heard about Vivi, the championship whippet[*1] that escaped from her crate at New York’s JFK airport about a month ago.

Apparently, there’s been a sighting[*2] (well, technically, I guess it would be a “sniffing”) as Newsday reports:

Almost a month after a champion whippet named Vivi escaped from her crate at Kennedy Airport after competing in the Westminster Kennel Club show, a pet detective said she believes the elusive California show dog has been trotting around the borough.

“She’s really doing New York,” said Karin Goin, of Depew, Okla., who searched the airport area Friday and yesterday. “This is the toughest breed to catch, and she’s traveling.”

Goin used her two tracking dogs – Cade, a chocolate Lab-coonhound mix, and Boone, whose pedigree is murkier – to search the airport area.

The two canine sleuths picked up a trail in South Jamaica that led them to 110-acre Baisley Pond Park, just north of the airport.

But later in the day, after a phone tip from someone who said she had seen the white and brindle dog trotting down her street, Goin took the dogs to a residential area near 192nd Street and 45th Avenue in Flushing, where she said she could tell by her dogs’ body language, including the position of their head and the pace, that the trail was likely only a day old.

The Minneapolis Star-Tribune[*1] reports that Northwest Airlines is introducing aisle seats for a fee:

Northwest will now reserve a few aisle and exit-row seats for people who are willing to pay $15 extra when they check in.

On a Boeing 757, only 10 seats will be for sale for the extra $15 fee. Six of those seats are in exit rows and four are aisle seats near the front of the 160-seat coach cabin.

On domestic flights, Cron stressed, there will be no extra fee attached to about 95 percent of the seats in coach. But the airline wants to take the next 30 to 60 days to get a handle on consumers’ willingness to pay extra to get a better seat, and the carrier may expand the number of seats offered with the new fee.