The strategy for the Democrats this August is to demonize the health insurance companies in order to provide an Enemy which will be defeated by the Good Guys via socialized medicine.

On the other hand, not only can’t I fire the government whenever I want, if I should try to do so, they will come after me with guns. And they have far more guns than I do. This health care “crisis” is not about health care at all. It is about power–the power that some people want to seize and hold over other people. It’s a story as old as humanity itself.

“Government is not reason, it is not eloquence, it is force; like fire, a troublesome servant and a fearful master. Never for a moment should it be left to irresponsible action.”[*1] 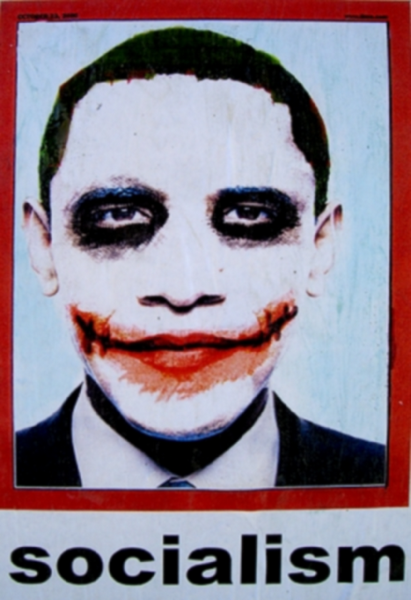 “You can dish it out but you can’t take it.”

“Dissent is the highest form of patriotism.”

“The truth hurts, doesn’t it?”

And, of course, from the movie The Dark Knight from which the Joker makeup comes: “Why so serious?”

Update: Here’s the deal–if you find one of these images upsetting but not the other, you are a rabid partisan at best, or a rank hypocrite at worst. If you’re offended by both of them, then you have a well-developed sense of fairness (and you’re also a bit naive about politics in general). If you’re able to at least find a chuckle in both of them, then you’re a fairly emotionally balanced, stable person.

Some clueless authoritarian statist[*1] writing in The New Yorker decides that federalism–i.e. the Constitution of the United States–has outworn its usefulness:

Federalism, often described as one of the great strengths of the American system, has become a serious impediment to reversing the downturn.

No, sir, federalism isn’t the problem. It’s precisely the LACK of federalism–in the high-handed, neofascist way Congress and President Clinton demanded that lenders start loaning money to people who couldn’t afford to pay back the loans–and in the myriad of other ways that the Federal Government squanders the wealth of the nation. And yes, State governments squander plenty of our money too, but they at least seem to be somewhat accountable precisely because we demand balanced budgets from State governors and legislatures.

So Cash for Clunkers, originally “budgeted” (and I use that term extremely loosely, we’re talking about Congress here) for $1 billion, is being expanded by 200% to three billion dollars.

Congress has a long, ugly history of severely underestimating the cost of their social engineering programs.

Remember this when your Congresscritter is in front of you telling you how much health care “reform” will cost.

The official Congressional prediction when Medicare passed in 1965 was that the program would cost $9 billion in 1990. The actual bill in 1990 was $66 billion.[*1] Today, it costs even more, and the program circles closer to the drain of insolvency every day.

We can’t afford to have the government involved in delivery of health care.

UPDATE: How about this little fact:[*2]

While listening to a clip of doctor representatives of the American Association of Physicians and Surgeons, I wasn’t surprised to hear that internal polling of their members revealed that 65 percent of doctors would prefer to treat Medicare and Medicaid patients for free than deal with the government. That’s certainly my perspective.

In fact, in my own office, Medicare and Medicaid are not accepted, but we do affiliate with the free clinics around the county, as do many, many other doctors. Helping people heal is why most doctors go into the business. That the business is also intellectually stimulating and personally rewarding is often secondary.

Why would the majority of doctors prefer not to deal with the government’s health care system?

Yep, costs out of control, and the providers would rather give their services away for free rather than deal with it. More government health care, PLEASE (that’s sarcasm, in case you’re humor-deprived, or a Democrat).

1. No Bill shall become Law which has not been read aloud, in its entirety, in its final form, separately in each House of Congress, such reading being performed in a normal voice and cadence and in the English language. Such Reading must be performed by Members of the respective House of Congress, and may not be delegated to any other person. Such Reading must be made available to the People for viewing and listening by the usual and customary methods of communication of the day, and such Reading shall not occur between the hours of ten o’clock in the evening and eight o’clock in the morning in the time zone of the capital city of the United States of America. During such Reading, no fewer than one-half of all Members of each respective House shall be in attendance, awake, alert, and attentive to the Reader within the Chamber of that House for the entirety of the Reading. During the period of the Reading, that House in which the Reading is occurring shall do no other business within or without that chamber. It is the wish and the demand of the People that the full and undivided attention of that House of Congress shall be on the content of the bill being Read.

2. No Bill shall become Law, the text of which that has not been presented to the People in an easily accessible and widely used medium and format, for a period not less than seven days and one hour IN ITS FINAL FORM for Public review and comment before each House of Congress shall approve such bill.

3. In circumstances of National Emergency of War or of imminent natural disaster ONLY, the Reading of the Bill may be suspended by four-fifths vote of the total membership of each House, the House of Representatives and the Senate voting separately.

4. In circumstances of War or natural disaster ONLY, the seven-day-and-one-hour period may be suspended by four-fifths vote of the total membership of each House, the House of Representatives and the Senate voting separately.