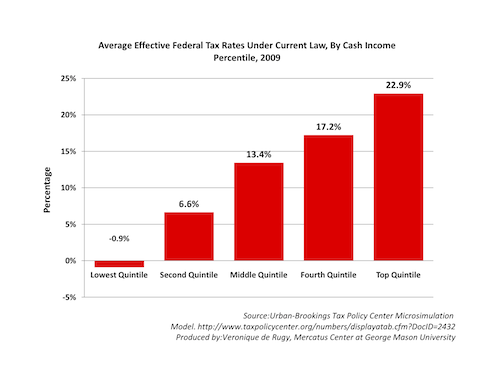 From Veronique de Rugy at George Mason University’s Mercatus Center[*1] , who apparently had some time on her hands this weekend. Two graphs:

So, tell me again how the richest Americans somehow aren’t paying “their fair share?” The top 20% of taxpayers are already the only segment of Americans who paying more by percentage in income taxes than they’re making in income. They’re already paying 67% of the bills, but only make 53% of the money.

The “progressives” are right. This isn’t fair. But not the way that they want you to believe.

The rich pay more. That makes everybody else, to some extent, freeloaders, riding in the big wagon of the U.S. economy but not pulling their weight by paying taxes equivalent to what they’re earning.