What’s in a name? When it comes to identifying what we are fighting against in the war for our civilization, quite a lot. Members of a movement among military and intellectual circles want to avoid asserting that we are fighting against “jihad” because that term is loaded with religious significance in Islam, replacing it with “hiraba“, to highlight the criminal nature of Islamic terrorists:

Walid Phares, writing in American Thinker several weeks ago, challenged these advocates. As Phares noted in his article, Preventing the West from Understanding Jihad[*2] :

The good holy war is when the right religious and political authorities declare it against the correct enemy and at the right time. The bad jihad, called also Hiraba, is the wrong war, declared by bad (and irresponsible) people against the wrong enemy (for the moment), and without an appropriate authorization by the “real” Muslim leadership. According to this thesis, those Muslims who wage a Hiraba, a wrong war, are called Mufsidoon, from the Arabic word for “spoilers.” The advocates of this ruse recommend that the United States and its allies stop calling the jihadists by that name and identifying the concept of Jihadism as the problem. In short, they argue that “jihad is good, but the Mufsidoon, the bad guys and the terrorists, spoiled the original legitimate sense.”

Most research studies are wrong.

There is increasing concern that most current published research findings are false. The probability that a research claim is true may depend on study power and bias, the number of other studies on the same question, and, importantly, the ratio of true to no relationships among the relationships probed in each scientific field. In this framework, a research finding is less likely to be true when the studies conducted in a field are smaller; when effect sizes are smaller; when there is a greater number and lesser preselection of tested relationships; where there is greater flexibility in designs, definitions, outcomes, and analytical modes; when there is greater financial and other interest and prejudice; and when more teams are involved in a scientific field in chase of statistical significance. Simulations show that for most study designs and settings, it is more likely for a research claim to be false than true. Moreover, for many current scientific fields, claimed research findings may often be simply accurate measures of the prevailing bias. In this essay, I discuss the implications of these problems for the conduct and interpretation of research.

David Gerlenter, in The Weekly Standard[*1] :

The issue isn’t tactics–doesn’t concern the draw-down that the administration has forecast and General Petraeus has now discussed, or how this draw-down should work, or how specific such talk ought to be. The issue is deeper. It’s time for Americans to ask some big questions. Do leading Democrats want America to win this war? Have they ever?

Of course not–and not because they are traitors. To leading Democrats such as Harry Reid and Nancy Pelosi, Hillary Clinton and Barack Obama, Al Gore and John Edwards, America would be better off if she lost. And this has been true from the start.

To rephrase the question: Why did Harry Reid announce months ago that the war was lost when it wasn’t, and everyone knew it wasn’t? The wish is father to the deed. He was envisioning the world of his dreams.

The Democrats’ embrace of defeat is inspired by no base desire to see Americans killed or American resources wasted. But let’s be honest about it, and invite the Democrats to be honest too.

Appeasement, pacifism, globalism: Those are the Big Three principles of the Democratic left. Each one has been defended by serious people; all are philosophically plausible, or at least arguable. But they are unpopular (especially the first two) with the U.S. public, and so the Democrats rarely make their views plain. We must infer their ideas from their (usually) guarded public statements. 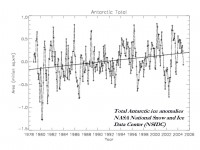 This can be seen on this graphic[*3] from this University of Illinois site The Cryosphere Today[*4] , which updated snow and ice extent for both hemispheres daily. The Southern Hemispheric areal coverage is the highest in the satellite record, just beating out 1995, 2001, 2005 and 2006. Since 1979, the trend has been up for the total Antarctic ice extent.

This doesn’t fit the global warming template, does it?  (Of course, you can find someone somewhere who will say that it does, just like some argue that global warming will cause cooling.  Sigh.)

SAN JUAN, Puerto Rico – Guards at the Guantanamo Bay prison camp found two prisoners sporting unauthorized underwear, and the U.S. military is investigating to determine how they got the contraband.

Both prisoners were caught wearing Under Armour briefs and one also had on a Speedo bathing suit, items the military said were not issued by Guantanamo personnel or sent through the regular mail, according to a Defense Department letter obtained Friday by The Associated Press.

. . . we “wingnuts” look upon today’s left as either cynical and insincere, or else suffering from the kind of mass delusion and collective political amnesia that we can’t comprehend — especially because we are able to show them their own words from a half decade ago, when the cause seemed quite just (or, at the very least, when they thought that saying that the cause was just would keep them from being marginalized politically).

WASHINGTON – A day before President Bush’s war address, Senate Democrats rejected a four-star general’s recommendation to keep some 130,000 troops in Iraq through next summer and sought legislation that would limit the mission of U.S. forces.

Their proposal was not expected to set a deadline to end the war, as many Democrats want, but restrict troops to narrow objectives: training Iraq’s military and police, protecting U.S. assets and fighting terrorists, Democratic party officials told The Associated Press.

The goal is to attract enough Republicans to break the 60-vote threshold in the Senate needed to end a filibuster. Democrats have proved unable to do that since they took control of Congress eight months ago.

Democrats struggled to regain momentum in the war debate after two days of testimony by Gen. David Petraeus, the top commander in Iraq, and Ambassador Ryan Crocker.

Petraeus said the 30,000 troop buildup begun this year had yielded some gains and needed more time. He recommended slowly reversing the buildup, drawing down about 5,500 soldiers and Marines by year’s end and aiming for a force of 130,000 next summer.